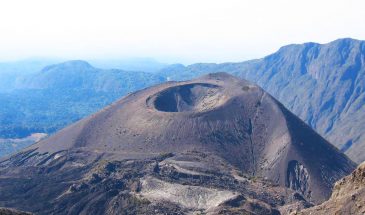 Mount Meru is Mount Kilimanjaro’s little sister, standing at 4,566m compared to 5,895m, but is still an impressive freestanding volcano, which makes a…

Mount Meru is Mount Kilimanjaro’s little sister, standing at 4,566m compared to 5,895m, but is still an impressive freestanding volcano, which makes a superb four day climb to the top. It last erupted in 1910 therefore can be classified as an active volcano. The first Mount Meru ascent was made by Dr. Fritz Jaeger, 1904. The town of Arusha lies at the base of Mount Meru Trekking, loads of trek companies do this trek. Wild animals are frequently found on this mountain therefore an armed ranger usually accompanies the trekkers.

Mountain Meru is the third highest peak in Africa and is the second highest mountain in Tanzania at 4,568m. The mountain is located within Arusha National Park, Tanzania’s gem. This prime location gives trekkers the chance to spot some of wildlife that inhabits the area. The ascend is quite steep, the route to the summit passes over streams, through parkland, montane forest, a giant heather zone and moorland. The summit is reached by a narrow, barren ridge, which provides stunning views of the Ash Cone lying several thousand feet below in the crater.

After breakfast depart Arusha about 8:30am drive to Momella gate. Make payment and start the climb with picnic lunch to the first hut called Miriakamaba hut.
Dinner and overnight – Miriakamba hut (3 ½ hrs)

After breakfast. Proceed with a climb to second hut called Saddle. This is too steep part compared to the first part (2 ½ ). During the afternoon, client can decide to attempt climbing little Meru peak and back. ( 1 )

Wake up at middle-night and have a cup of tea before starting attempt big Meru peak. Proceed to summit crossing rocky path and back to Saddle hut for full breakfast. The day will be spent resting .
Lunch, dinner and overnight at Saddle hut.

Leave Saddle hut and descend down to Momella gate via first hut (Miriakamba) where you will be transferred to the place of your choice, either Moshi, Arusha or Kilimanjaro airport.