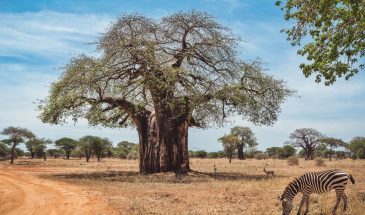 Tarangire National Park is one of the national parks found in the northern safari circuit in Tanzania. The name Tarangire originates from the…

Tarangire National Park is one of the national parks found in the northern safari circuit in Tanzania. The name Tarangire originates from the Tarangire River that crosses the park. The Tarangire River is the primary source of fresh water for wild animals in the Tarangire Ecosystem during the annual dry season. Its natural vegetation mainly consists of Acacia woodland and giant African Baobab trees, with huge swamp areas in the south of the park. Both the river and the swamps act like a magnet for wild animals, during Tanzania’s dry season. This park is well known as the elephant paradise due to high densities of elephants.

Tarangire national park has large number of species of migratory birds, large herds of elephants, various tree species including the baobab also other wildlife are there such as impala, zebras, leopards, lions, wildebeest and hartebeest. The wild dogs are only seen once in a while.

There are lot of activities to be done at Tarangire national park; such as bird watching, game drive, guided walking safaris and visiting Maasai villages.

The Elephant Playground,’ as Tarangire is sometimes called, provides a spectacular destination for a memorable day-trip. Huge herds of elephant are a distinctive feature of Tarangire, but the grassland, swamps and floodplains found here are home to big cats, giraffe, baboons and hippo – plus many, many more species. Tree-climbing lions and rock pythons are other local specialities. Your afternoon game drive will seek out the varied animal and birdlife at Tarangire, a Tanzanian hidden gem, before you return to Arusha.

With an early pick from your Arusha hotel at 08.00, our two-hour drive will take us the 120km to Tarangire National Park, one of Tanzania’s real treasures. You spend as much time as possible at the park, marvelling at all its wonderful wildlife with the assistance and expert knowledge of your Eden Discovery guide. You will have time to enjoy your picnic lunchbox, included as part of your day tour. At 16.00, we set off from the park to reach Arusha and your hotel again by 18.00.